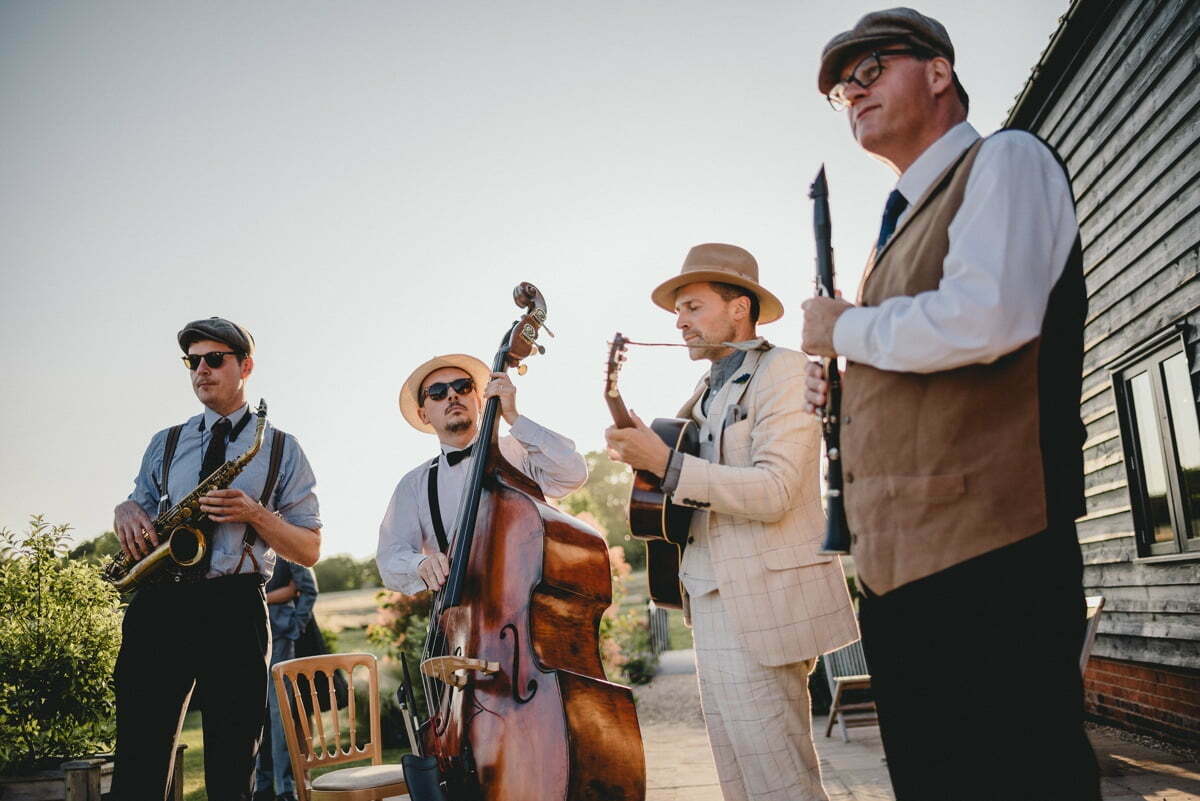 How to hire 1920s band and book the real deal

Do you want to hire 1920s band that’s the real deal, or a fake imitation? Nice-looking videos of 1920s-style bands doing their thing are all over the internet. They might be dressed to the nines but the music is a bit lacking in excitement and authenticity. They’re basically a pop function band that also does ‘a 1920s set’ to cash in on the Peaky Blinders trend. Their repertoire is limited and they don’t produce an authentic sound.

Instead, you want a band that fills the dance floor, plays all the classic hits, and know their instruments like the back of their hand. You need to hire the perfect 1920s band. This is how. 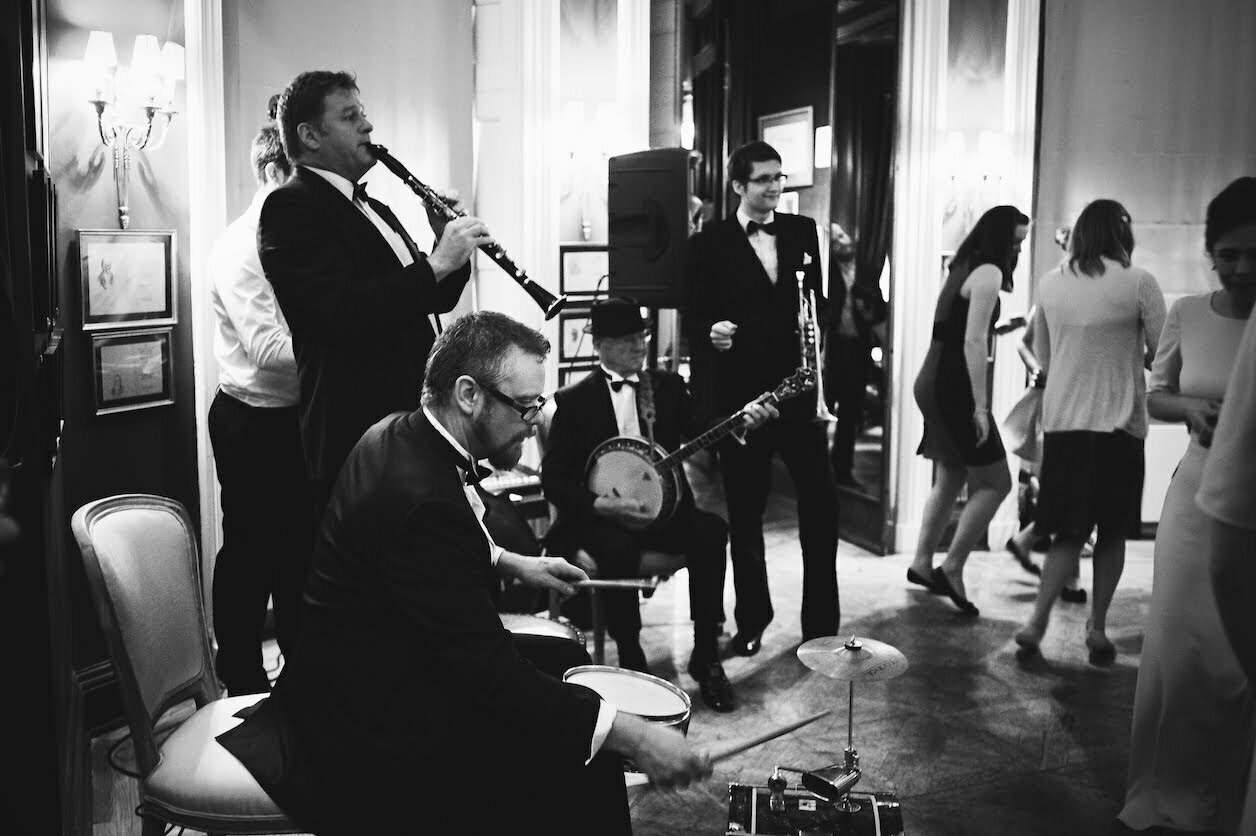 What sets out our bands from the rest? We specialise in 1920s music. We don’t perform any other styles or genres of music. We live and breathe the period. We’ve studied the music inside out, written it out, memorised it, worn it, improvised it. We have over 250 songs and counting in our repertoire.

What we do can’t be recreated. It’s impromptu 1920s music, with off the cuff horns, vocals and on the spot arrangements. Each and every performance is distinctive, original, and unique, always remaining authentic to its tradition. Make your event truly unique.

1. Welcome your guests in true 1920s style. Indoors and out!

Our 1920s band can perform indoors and out at any occasion. We do weddings, corporate launches, New Year’s Eve parties, themed fancy dress parties, and much more. Just give us a bit of time to tune up and we’ll be ready to set the scene.

We don’t go anywhere without hats, shiny shoes, waistcoats, and pristine 1920s tailoring. You’ll think we arrived in our own personal time machine…

3. Get people up on the dance floor for a cheeky Charleston (or two…)

Add some drums and lights, and your evening entertainment is sorted. The Charleston is famously high energy and perfect for lively parties and wedding receptions.

If your guests are in the mood to dance, then Silk Street Jazz can be the centrepiece of your evening’s entertainment. We can even be accompanied by our razzle dazzle 1920s dancers! Fringe and feathers will fly.

It’s smart to hire 1920s band that regularly works with their own dancers. You don’t want to book separate dancers and make things complicated. Separate entertainment bookings can be a recipe for disaster. Trust us – we’ve seen it happen!

Love the decade but unsure about a theme? We’ve performed at every kind of 1920s themed party you can imagine. Here are some 1920s party ideas to get your planning started:

“I could not recommend this band enough. We were so lucky to have them as our afternoon entertainment. So many guests have remarked on how brilliant you were, so a big thank you!” 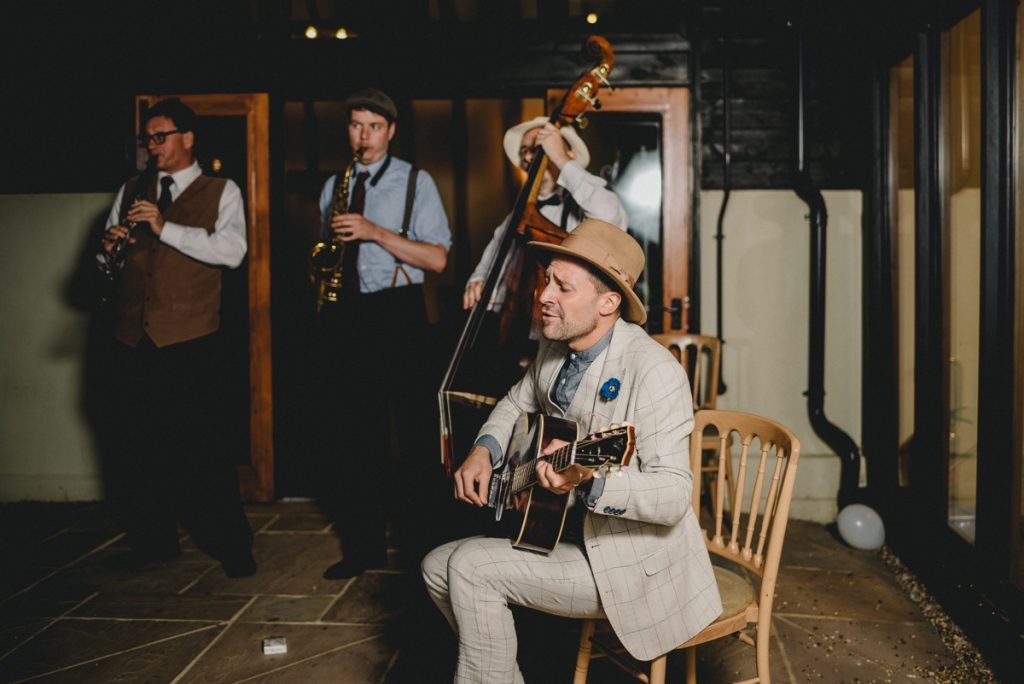 How to make booking a 1920s band easy

Planning a big bash takes a lot of organisational know-how. We’re the best in the industry for a reason – we make booking simple and easy.

If you go to an act directly, there’s no guarantee they’ll be a full-time professional. There can be a lot less payment security and availability. It’s possible to pay less and cut costs, but think about what you could be getting in return – flakey musicians, limited date availability, and no insurance if plans fall through.

Some entertainment agencies are purely bookers. They take their fee and then leave the act and client to organise things between them. Silk Street is different – we’re by your side the whole way. We have experience not just in event management but also performance. We can secure the act (or acts!) you want with just one, simple, thorough point of contact. It’s a lot less hassle and less fuss than booking the band yourself.

Need to talk things through? We can talk on the phone, on Skype, or come directly to you. We’re not just an anonymous voice at the end of the phone.

Time to strike up the band! Your big occasion needs a real 1920s band. Booking is easy. All you have to do is get your Charleston steps right…

You can book the best 1920s band in the business right now with a simple enquiry form, or get a quote directly from the Silk Street team.

“Fantastic band, really suited our Peaky Blinders themed ball. Many guests commented that they would like them at their event. Very professional, they arrived early, communicated well and were flexible and clear in what they could deliver, I would happily book again!”

Get in Touch Request a Quote