Tune in to watch the band perform their traditional Dixieland jazz in the ‘Big Zing’ , episode twenty of the hit children’s TV show.

In case you miss it, the programme will be repeated on the 29th of April at 5:15pm and on Friday the 30th of April at 8am. You can also watch the show via the BBC’s iPlayer – hurry though, it will only be available for streaming for a week or so!

Here is a sneak preview of the band on set at Pinewood Studios: 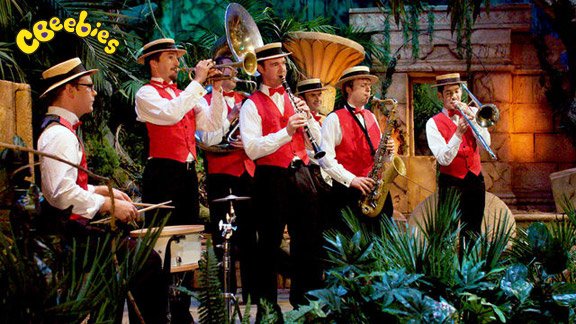 Zingzillas and friends play music on their tropical island paradise and meet different musical guests each week. Tomorrow, it’s Todd’s birthday and he thinks nobody has remembered, but Panzee is planning to give Todd a surprise birthday party. The Zingzillas need a cake, streamers and a special song. They visit the Glade for inspiration and watch The Silk Street Jazz perform their inimitable jazz.

Silk Street Jazz are a three to ten piece acoustic jazz band specialising in bringing the era of flapper girls, the charleston, prohibition and the Great Gatsby back to life. We we perform all over the UK at weddings, funerals, parties and corporate events and often appear on television. Watch out for us in the the forthcoming 201o Big Brother Trailer!

For more episode information visit the ZingZillas website at the BBC